The profits obtained by Acerinox in 2018, €237 million, slightly exceeded those obtained the previous year and were the highest profits made in the last 10 years. The pre-tax profit, of €310 million, was 4% higher than in the previous year.

The net sales, amounting to €5,011 million, was the highest in the last decade and 8% higher than in 2017 due to the increase in the sale of physical units (+ 2%) and higher selling prices.

The accumulated EBITDA rose to €480 million, 2% lower than the previous year, after carrying out an inventory adjustment of €22 million.

The evolution of the results was positive except for the fourth quarter, in which numerous negative factors converged in the European market: an avalanche of imports as a result of the ineffectiveness of the provisional safeguard measures in Europe, an environment involving a fall in the cost of raw materials and general economic uncertainty. In the United States, where the market performed better, the affect was limited to the usual seasonal effects in the fourth quarter.

Quarterly EBITDA in millions of euros (% of sales)

In a very volatile year, Acerinox was able to generate an operating cash flow of €326 million that permitted €155 million worth of investments being made, in accordance with its strategic plan, and it also permitted to remunerate shareholders with €128 million.

Acerinox continues to reduce its debt

The strategy followed during the year focused on optimising the cost of financing, taking advantage of existing liquidity in the markets, extending maturities and increasing fixed rate debt, in the face of the expected increases. 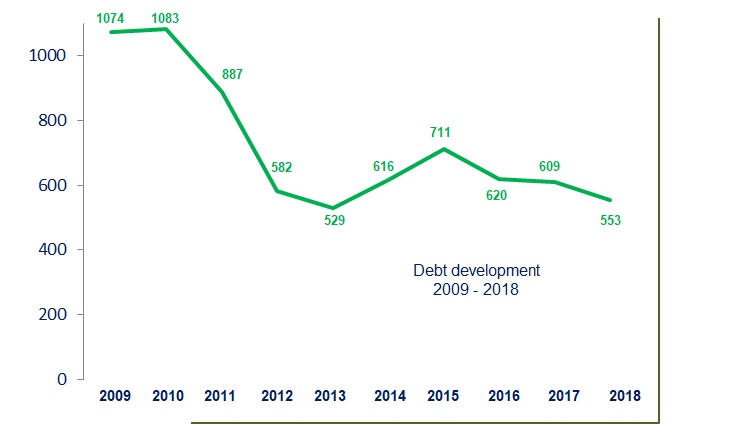 Acerinox launches Excellence 360 °, a pioneering plan that will result in returns in Ebitda of EUR 125 million in 5 years

This modular project aims to progressively achieve returns in EBITDA of 125 million euros per year in recurrent way from 2023.

The Board of Directors of Acerinox approved Excellence 360°, a concept designed to manage returns from the Digital Transformation through a global vision of the business. This strategy will integrate the improvements in traditional Excellence Plans, with the application of new technologies.

Excellence 360° is a pioneering idea that will run initially between 2019 and 2023, although it will have a long-term and ongoing development. In this project, Acerinox will be together with Minsait (Indra Group), company leader in value creation through the digital transformation of its customers.

Excellence 360º is focused on enhancing the entire business: Production (increasing the process reliability and productivity), and Supply Chain (optimizing the stock and increasing the precision of deliveries), Commercial (improving the margins) and Purchases of Raw Materials (optimizing the mix all time).  All of these, thanks to the use of new systems and placing the customer at the center of the business.

Excellence 360º means a change in the way of work to supply the best stainless steel and to keeping as the most competitive company in its sector.

In the words of the Chief Executive Officer, Mr.  Bernardo Velázquez, "It will lead us to a general improvement of productivity and efficiency bringing visibility to the business and agility in decision-making. Excellence 360° is change in business model in which we are committed to benefit of the huge knowledge of our people and the best technologies available."

Excellence Plan V (2017-2018), last one before Excellence 360º launches, achieved positive results in productivity improves and costs savings, having accomplished 55% of the objectives.

The safeguard measures in Europe are working properly, for now, and imports fell throughout January.

Inventories in Europe are at normal levels and, as for United States, they will be normal by the end of the quarter.

These circumstances, together with the increase in the nickel price, will improve the market situation. This effect will be especially evident in the second quarter of the year.

Even so, the first quarter's EBITDA is expected to be better than that achieved in the fourth quarter of 2018.